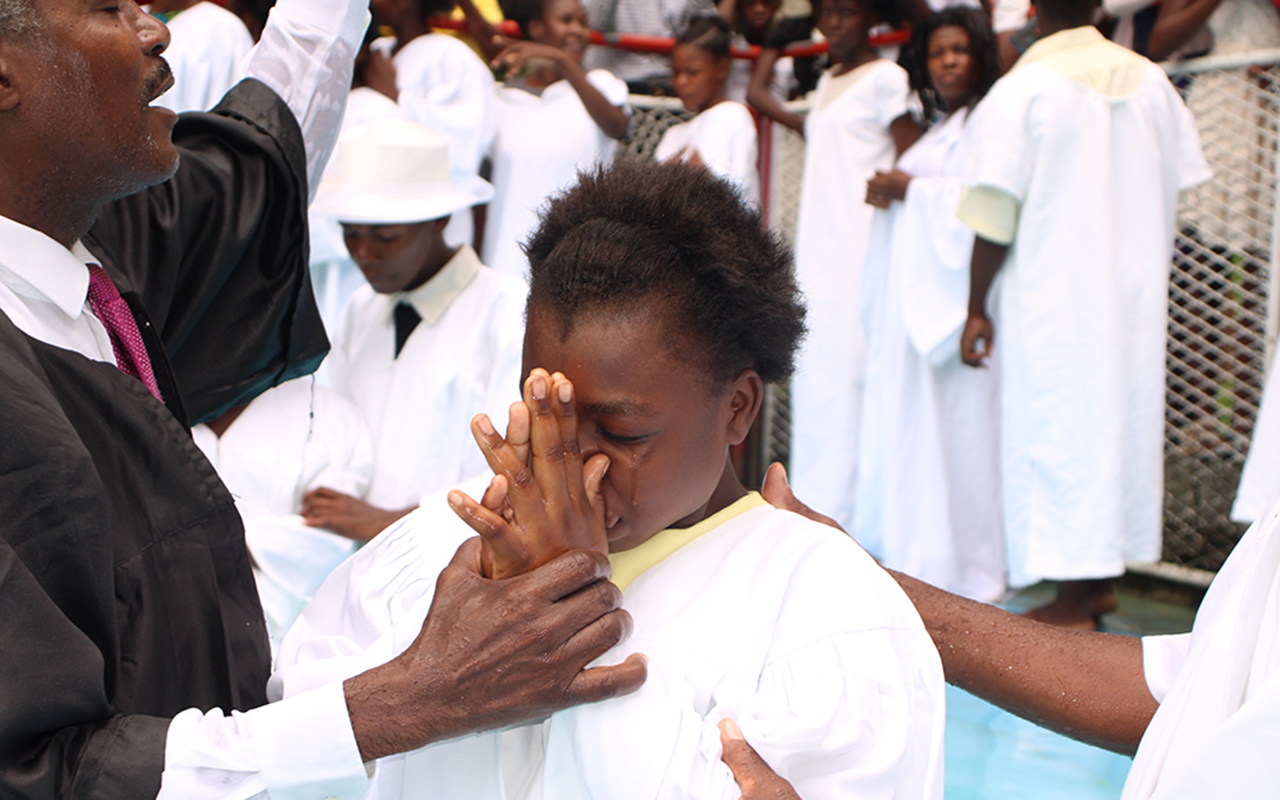 A young person from the Galaad Adventist Church in Carrefour listen to the pastor pray before she is baptized as tears run through her cheeks during a baptismal ceremony held in the pool on the campus of the Haitian Adventist University last month. More than 8,000 new believers joined the Adventist Church through baptism thanks to the coordinated evangelism efforts by church members and leaders in Haiti since January this year.

The Seventh-day Adventist Church in Haiti recently welcomed more than 1,600 new members into the church at the close of two weeks of online evangelistic meetings held in Pétion-Ville. The series was part one of territory-wide efforts across churches in the French-speaking regions of the Inter-American Division, including Haiti, Martinique, Guadeloupe and French Guiana, Apr. 3 – 16, 2022.

The church in Haiti has baptized more than 8,000 due to evangelism efforts since January.

The evening series, coined as “Amen, Come Lord Jesus,” was presented by Pastor Vanel Louissant, evangelist and personal ministries director for the church in Central Haiti. Pastor Louissant challenged hundreds of attendees at the Béthanie Adventist Church and thousands of online viewers to cling to the hope of salvation in Jesus. “You must get serious and prepare for Jesus Christ’s soon return in this world of despair and tribulation,” said Louissant. “Jesus can save your family and restore to man what was lost in Eden. We will see Jesus as He is and live with Him eternally.” 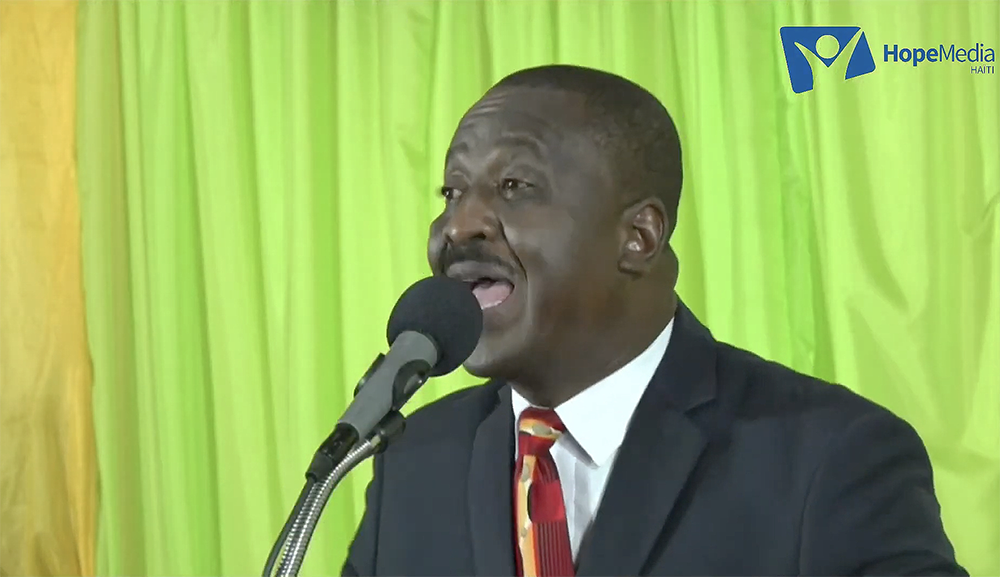 Pastor Vanel Louissaint, evangelist pastor and personal ministries director for the church in the Central Haiti Conference, leads the keynote message on Apr. 12, 2022, from the Béthanie Adventist Church in Pétion-Ville, Port-au-Prince, in Haiti.

Margarite* who was among 1,690 baptized across Haiti on Apr. 16, felt unspeakable joy once she emerged from the water in Pétion-Ville. “I feel so liberated now. I used to belong to another church,” said Margarite, as she shared that she had been persecuted by so many members of her family. “One tried to kill one of my boys, but now that I am in Jesus, I am no longer afraid of threats. I will keep the Sabbath until Jesus returns.”

Beatriz* also embraced the Adventist faith with great joy in Pétion-Ville. “My daughter and my mother, who were [of another faith] like me, also accepted Jesus even though I had not forced them to follow me,” said Beatriz. “Jesus lives in my heart and I pray my brother can also accept Jesus too.”

“Praise God for the success of this joint campaign with the first international campaign together with the French Antilles Guiana Union,” said Pastor Pierre Caporal, president of the church in Haiti. “We observed a new zeal and commitment from our leaders and members in in the task of sharing the gospel leading up to this campaign.” 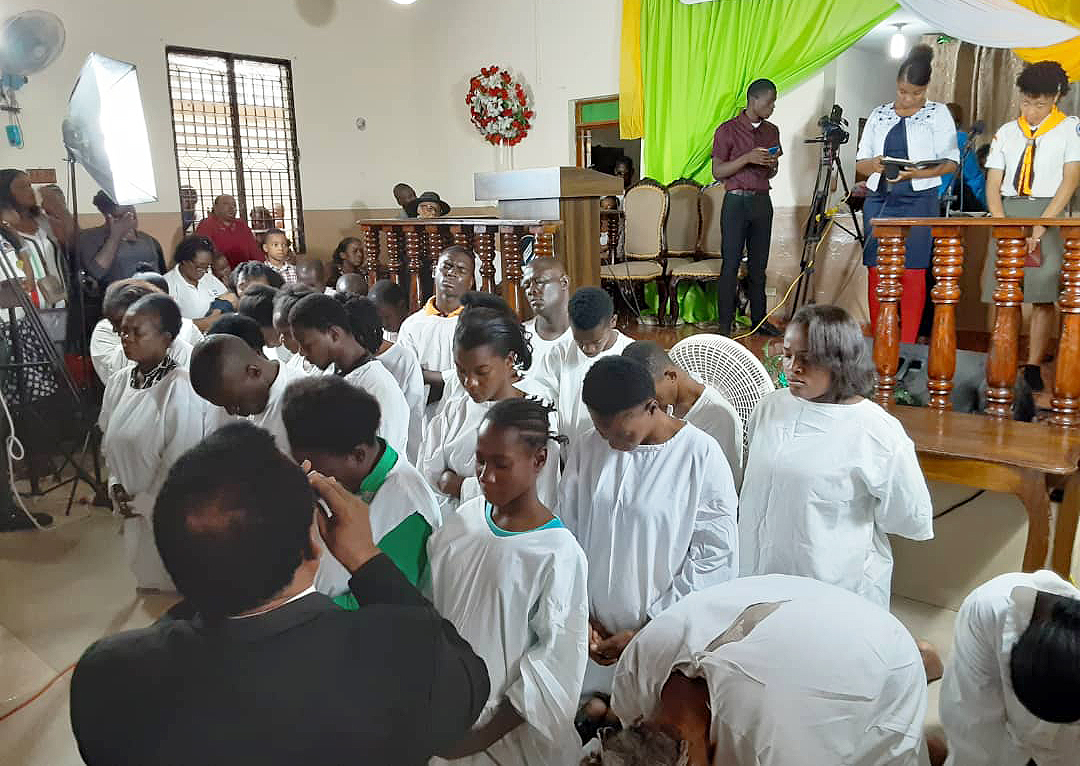 Individuals are prayed for before they are baptized at the Béthanie Adventist Church in Petion-Ville, Haiti, on Apr. 16, 2022.

The series was the climax of comprehensive teamwork among the more than 200 district pastors and hundreds of laypersons who tirelessly endeavored to spread the message of hope and salvation through small group bible studies and community impact activities, during a year when the Inter-American Division is celebrating its centennial anniversary, said Caporal.

The more than 8,000 newly baptized members represents a significant change since the pandemic hit and safety challenges hindered the work of sharing the gospel in cities and communities, said Caporal. The year jumpstarted with double blessings from God with a new enthusiasm of spreading the message of hope through television, radio and the internet, he added.

At the Université Adventiste d’Haiti (UNAH or Haitian Adventist University) in Carrefour, in Port-au-Prince, professors and theology students teamed up to impact several neighboring communities for evangelistic campaigns ahead of the online series. Students would load up in trucks and armed with the bible and dedication to the gospel connected with dozens of non-believers, faculty shared. 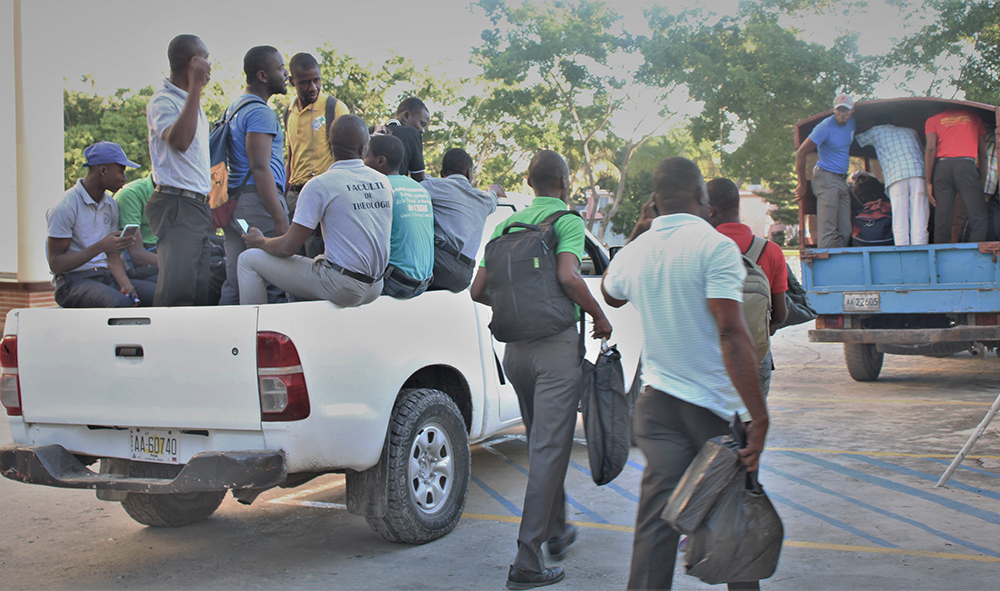 One of the churches that hosted a team of students as part of the evangelistic movement across Haiti was the Gilead Adventist Church. “We are so grateful they came because there is an urgency to preach the Word of God today,” said Jacklyn Georges, personal ministries director at the church.

Every theology student took part in at least one evangelistic campaign, said pastor Edgard Etienne, dean of theology at UNAH. “We moved in extremely difficult context and despite all the difficulties on the road and the situation in the country, we returned safely to continue praising the Lord.”

Several of the student missionaries have been in hard-to-reach areas where even cell phone signals do not reach but were happy with the experience. Third-year student Duclona Wilbens said there were so many countless challenging experiences. “We are all convinced that God was with us each day,” said Wilbens. 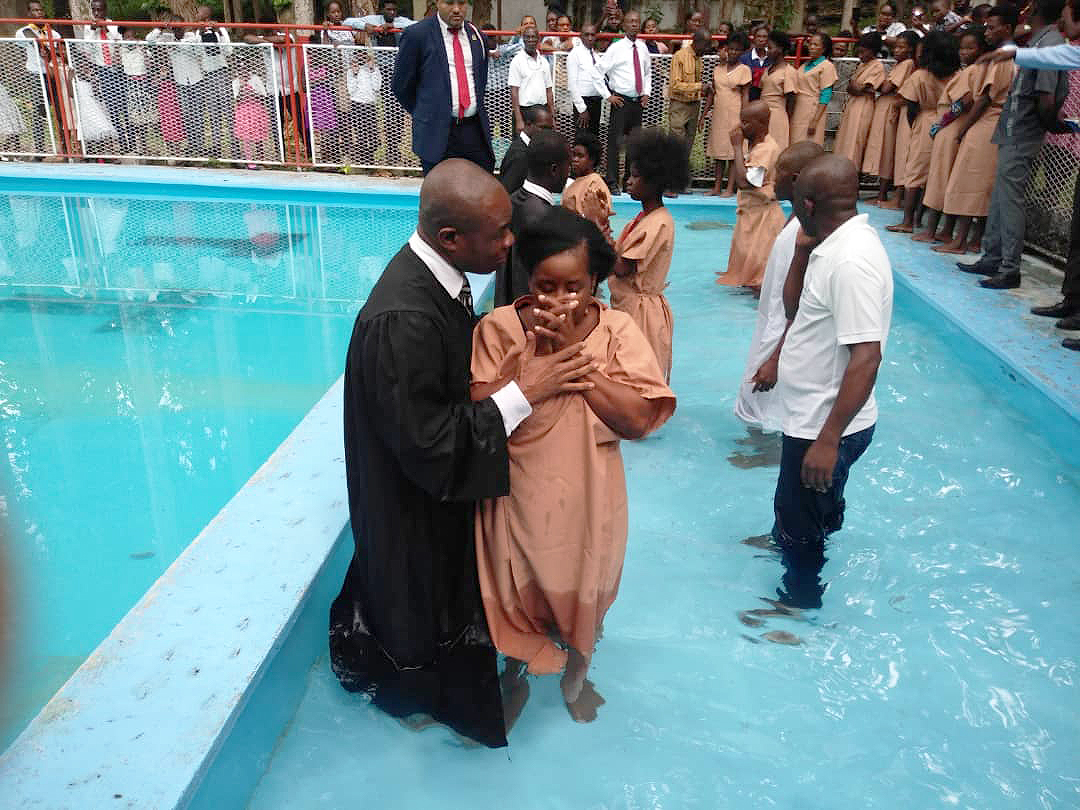 Dozens were baptized in the pool on the campus of the Haitian Adventist University in Carrefour, Port-au-Prince, Haiti, last month.

Resonating the message of salvation

A goal of reaching at least 100 baptisms during the professors-students evangelistic efforts turned into 500 new converts, reported Etienne. The important step to continue is for member retention to be effective is for the new members to share the gospel and make other disciples of Jesus, he added.

“We want the message of Jesus’ soon coming to resonate even beyond these evangelistic series,” said Caporal. “Our church understands that preaching the Word of God is its chief purpose and these united efforts were a new opportunity for leaders and members to unite their strength to invite people to salvation.”

Church leaders in the French Antilles Guiana Union territory reported that 45 persons were baptized at the end of the series which had been broadcast through the church’s online Esperance TV Interamerique channel in the region. 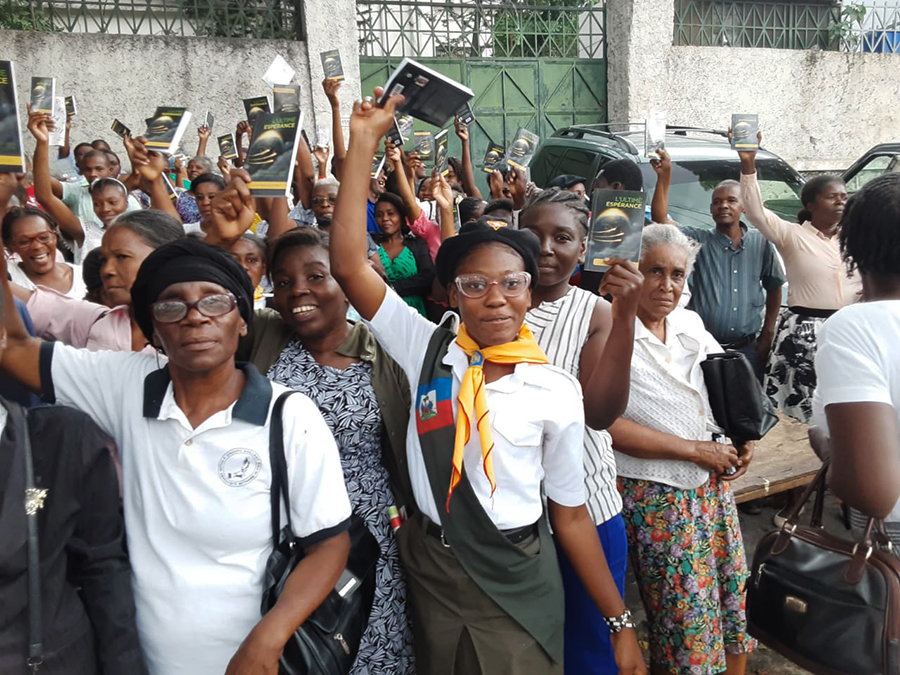 Church members hold out the missionary book of the year “The Final Hope” before they take to the streets in their communities to distribute it on Apr. 16, 2022, as part of the evangelistic efforts for the year in Haiti and the rest of the unions in Inter-America.

Leaders and members have been preparing for the second French-speaking regional campaign to take place May 8-22, 2022, from Martinique. Evangelist Pierre-Manuel Fleurantin, who is serving as the executive secretary of the French Guiana Mission, will be the keynote speaker during the “Living at the Heart of the Crisis” series.

*Not her real name

Auguste Richner and Jean Carmy Felixon contributed to this report.

To watch the upcoming series from the French Antilles Guiana Union on May 8-22, 2022, Click HERE

The East Caribbean Conference of Seventh-day Adventists has its genesis in the Leeward Islands Mission which was organized in 1926. At the time this consisted of the territories of the Leeward Islands, Martinique, Guadeloupe, Dominica, the Dutch Islands, the origin Islands. Over time a number of adjustments were made as the work grew….